New research conducted by AHURI, ‘The changing geography of homelessness: a spatial analysis from 2001 to 2016’ has revealed homelessness is continuing to increase in Australia’s major cities.

Almost two thirds of Australians experiencing homelessness are located in the country’s capital cities, with this number continuing to grow in size.

Homelessness on a per capita basis still remains highest in very remote areas, yet these figures are becoming more dispersed nationally and growing in larger cities. Specifically, cities with a shortage of affordable private rental housing and higher median rates are seeing homelessness continue to rise. Sydney, Melbourne and Hobart have the most significant rise in homelessness.

AHURI’s research indicated overcrowding in major cities is directly correlated with weak labour markets and poorer areas with a higher concentration of males. However, these associations do not apply for overcrowding in remote areas.

The study also found that 63 per cent of homelessness is now based in Australia’s capital cities, up from 48 per cent in 2001. While homelessness has been falling in remote and very remote areas, it is still higher in these areas per head of the population.

Shares (%) of homelessness and population by area type 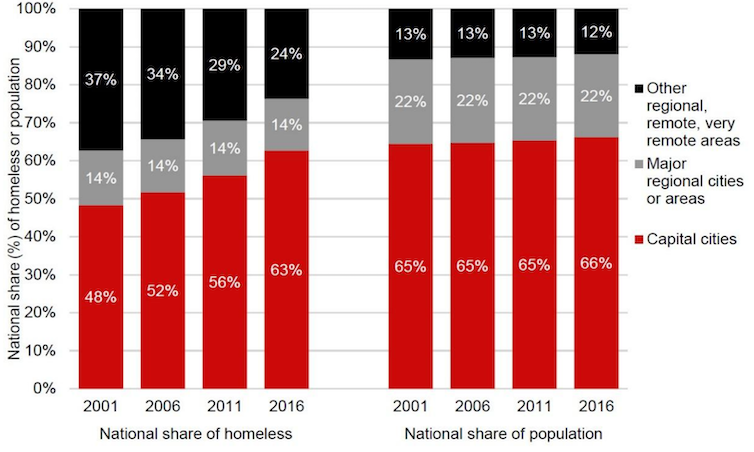 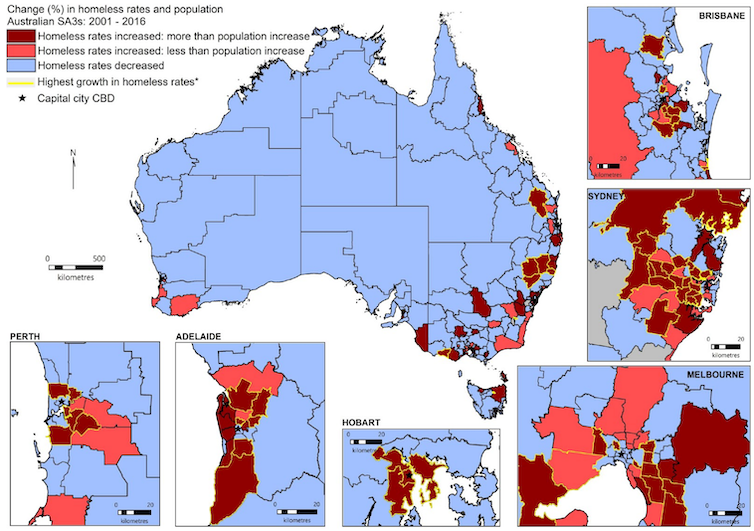 The number of households living in severely overcrowded dwellings has doubled in capital cities over the last 15 years, accounting for much of the increase in homelessness overall.

As homelessness across the country continues to rapidly increase, now is the time for governments to increase the supply and size of affordable rental dwellings. Housing affordability is a crucial issue that needs to be combated so all Australians can have a roof over their heads.

AHURI has released a new report , Understanding opportunities for social impact investment in the development of affordable housing.

The report examines the opportunities for, barriers to, and risks to social impact investment (SII) for social and affordable housing in Australia.

SIIs aim to achieve a specific beneficial social objective together with a financial return, and measure the achievement of both.

The researchers looked at US and UK models and interviewed government experts, social impact investors and not-for-profit housing providers, to inform the analysis.

CHIA is assisting the Summer Foundation and AHURI to discover more about the availability of specialist disability accommodation through a survey of Community Housing Providers. The survey will help investors and lenders better understand demand and inform housing providers about what to build and where.

SDA providers have until October 5 to complete the national study into the demand for  National Disability Insurance Scheme (NDIS) housing.

There are two focus areas to the survey:

Section 1 – a mandatory survey, which seeks to obtain information about the current SDA dwellings.

Organisations that participate in the survey will receive a copy of the SDA Housing Demand final report.

Summer Foundation will use the results to commission a report to inform investors, lenders and housing providers about demand and where investment is needed. The report will also help identify potential investment risks.

There is also an of the survey fields attached if this is more convenient (e.g.).

Click here to take part in the online survey can be found here, or download the excel version here if you would prefer to cut and paste your SDA data.

Any queries about the survey can be made via [email protected]