State and territory outlays totalled $5,595.7m.[1] State expenditure on social housing per capita varied from $82.94 in Victoria to $638.97 in the NT. Victoria’s per capita spend is now less than half the national average of $166.93 per head of population.

State and territory governments reported transferring (management of) $1,375.4m of public housing stock to the community housing sector in 2017-18. Most of this was in SA where the transferred stock was valued at $1,079.1m.

Over the past decade, the number of social housing dwellings has increased by 29,930 or 7.4% – well below population growth of 11% over the same period. 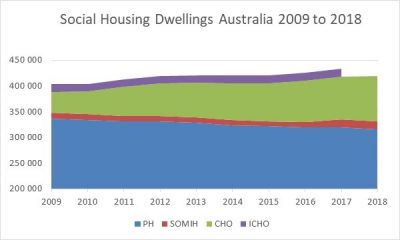 The latest Report on Government Services 2019 confirms another year of steady growth for the community housing sector.

Further sector consolidation saw the number of mainstream community housing providers fall by 66 (10.7%) from the previous year to 552.  Provider numbers fell in all jurisdictions except WA, ACT and Tasmania. Most of the reduction occurred in Queensland (down 50 providers to 143) where a number of organisations were identified as no longer providing social housing, and several other (small) providers merged in 2017-18. [2]